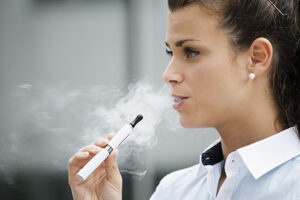 Smokers have a new option for inhaling their nicotine: electronic cigarettes commonly called e-cigarettes. While e-cigarettes still are just a fraction of the $80 billion traditional cigarette business, according to CNBC, sales have grown from $10 million in 2007 to $1.7 billion by the end of this year.

As a healthcare professional, you may be aware that e-cigarettes are a growing trend. But did you know that they pose several very real dangers?

These completely unregulated devices often exist in a grey area – not specifically banned like cigarettes – but still posing many risks to patients, visitors, staff – and facilities.

What is an e-cigarette?

Most e-cigarettes are made to look like and act like a regular cigarette – even mimicking the glowing tip.

To use an e-cigarette, a smoker turns the e-cigarette on and a tiny heater vaporizes the juice. The smoker inhales the vapor into their lungs, exhaling what the e-cigarette industry calls “vapor” – which is why using e-cigarettes is commonly called “vaping.”

Risk One: The juice is not regulated.

The juice that gives vapers that cigarette-like feeling is a chemical stew of nicotine, formaldehyde, enhancers, stabilizers, preservatives, vaporizing agents, flavors, and whatever else the manufacturer decides to add.

Problem one: There are no controls over what can be added to the juice. Random tests by scientific and government agencies on a variety of juices have turned up known carcinogens and wide variations in the amount of nicotine.

Problem two: Labeling is not regulated. Manufacturers are not required to list all ingredients. There are no testing standards for purity, consistency, or chemical makeup. A patient who is vaping could exhibit drug interactions or reactions and a medical team would have no way of knowing what is causing that reaction.

Risk Two: What is in the vapor?

The recent study cited in the New England Journal of Medicine shows alarming levels of formaldehyde. A German study by the Fraunhofer Wilhelm-Klauditz-Institut in 2012, the vapor contains “acid, acetone, isoprene, formaldehyde and acetaldehyde, averaging around 20% of what the conventional cigarette put into the air.”

E-cigarettes may cause the same type of risk to both smokers and bystanders that traditional cigarettes cause: an unhealthy indoor air quality with unknown chemicals being exhaled by vapers.

On March 22, 2014, in Syracuse NY, Brandon Leonard, a St. Joseph Hospital patient safety staff member was assisting one patient in a room when suddenly he heard a loud pop and he spotted flames “shooting out.” The patient in the next bed had been smoking an e-cigarette when flames suddenly appeared.

Hospital personnel immediately acted, but the patient was burned across her face and mouth where the oxygen lines were.

According to Syracuse.com, website for The Post-Standard, Syracuse Fire investigator Joe Galloway says the cause of the fire is currently undetermined, but “the patient’s e-cigarette use cannot be eliminated as a potential cause.” At the time the fire occurred, the patient was actively smoking an e-cigarette.

Dozens of fires across the country.

On August 9, 2014, baggage handlers at Logan Airport in Boston had to extinguish a smoldering fire in luggage on Jet Blue flight. The cause: an e-cigarette. In 2009, a FedEx shipment of 1000 e-cigarettes caught fire in Minneapolis. News around the US details dozens of incidents from car fires to house fires – all attributed to faulty chargers and batteries used by the e-cigarettes.

Users generally report the same story: an e-cigarette is in its charging station when suddenly it bursts into flame.

Some e-cigarette industry groups try to place the blame on the users: a charger used from a different manufacturer, inattention while charging, or charging too long. The unregulated nature of the business means that there are no safety standards that must be met by either the charger or the battery.

On Friday, January 23, the FAA issued an alert for airlines cautioning against passengers carrying e-cigarettes in their luggage. The Airline Pilot’s Association (APA) wants the ban to become enforced.

“These incidents and several others occurring outside of air transportation have shown that e-cigarettes can overheat and cause fires when the heating element is accidentally activated or left on,” the agency said in the alert, which was reported by Bloomberg News.

How do the fires start?

Most e-cigarettes use a lithium ion (Li-ion) battery. Li-ion batteries are desirable for their high energy density: a compact size coupled with an ability to hold a charge. According to a report by The Economist, the very size and volatility of the battery components along with their light-weight design is not only what makes them attractive – it makes them dangerous. “Catching fire if something goes wrong…is in their nature.”

While fires are rare, the increasing use of these batteries in everything from cars and tools to small devices such as e-cigarettes means that there is an increased risk of one of these everyday devices failing – and catching fire.

E-cigarettes batteries have to be charged after about 150 – 300 inhalations. A heavy vaper may need to charge their e-cigarette throughout the day. Regardless of the size of the battery, the charging is where the fires often start.

The e-cigarette can be charged in a variety of ways:

A fourth charging option that is unique – and harder or impossible to detect – is a Personal Charging Case (PCC) which is a larger portable Li-ion battery (about the size of a traditional pack of cigarettes) which can hold enough power to charge the typical e-cigarette about four times. You charge the PCC using a wall, car, or USB charger and then plug the e-cigarette into the PCC.

While some organizations are still assessing e-cigarettes, The Joint Commission (TJC) prohibits the use of e-cigarettes (EC.02-01-03 EP 1) and requires hospitals to have a written policy prohibiting smoking in buildings.

While TJC recognizes that there may be some patient-specific exceptions, TJC takes the position that e-cigarettes fall into the same category as cigarettes and hospitals must have policies in place to ban usage.

Overall Risks: No regulation, no approvals, no oversight.

No part of the e-cigarette is regulated.

The mechanical parts – including the battery and charger – do not have to meet any standards for safety or reliability from any regulatory agency. Safety features to prevent overheating common in Li-ion batteries that charge your cell phone or laptop may be missing or inadequate. The batteries themselves may not be sturdy enough to survive being tossed in a car or falling off a table.

The juice can consist of anything that the manufacturer wishes to add. Nicotine is common. But so are dozens of other chemicals and additives. Health care professionals would have no way of knowing if anything contained in the juice could cause drug interactions. Even a concentrated dose of nicotine can have perilous interactions. No FDA-approvals. No way of knowing exactly what a patient is inhaling – or exhaling. Researchers are beginning to study the chemicals to find what is being ingested and what impact the expelled “vaport” has on both people and air quality around vapers.

The vapor that’s exhaled is not just “water vapor” as claimed by the manufacturers. It contains chemicals that contribute to an unhealthy air quality.

E-cigarettes – not part of a prescribed smoking cessation program.

In August 2014, the American Heart Association issued a position on e-cigarettes that only added to the confusion: on the one hand condemning their use and urging regulation and on the other saying that e-cigarettes may “help smokers quit.”  Interestingly, a post on their website in May (E-cigarettes Don’t Help Smokers Quit) seems to contradict this very statement.

Even the experts can’t agree.

What should you do?

Evaluate, update, and enforce your facilities’ policies on cigarette and e-cigarette use. Banning e-cigarette use will cut down- but not eliminate – the risk. You need to eliminate vaping by patients, visitors, and staff and add it to your smoke-free policy.

Educate about the dangers of both the juice and the vapor. E-cigarettes are not a harmless alternative to smoking.

Michigan Health and Hospital Association (MHA) has created a template to help facilities add e-cigarettes to a smoke-free campus policy. It explains what an e-cigarette is, why it should be added to a hospital’s smoke-free policy, and sample language.

Create a policy about how and where devices may be charged. Consider eliminating unattended charging, charging any devices in areas where oxygen is in use, and number of devices that can be charged at any one time. This policy should extend to everyone – patients, visitors, and staff.

Review both local and state regulations on smoking. Cities including Chicago, and states including Arkansas, include e-cigarettes as part of smoking bans. Check with your state and local health departments.

Train personnel to be aware of what e-cigarettes look like – especially when plugged in and charging. A patient, visitor, or staff member may decide to charge up their e-cigarette and may not see any harm since they are not actually using it to vape.

Educate about the dangers of Li-ion batteries. Charging in a hot place such as a car, overcharging, damage to the battery, and unattended charging can all lead to fires.

E-cigarettes are already in your facility. Conduct a Risk Assessment. Make a plan.

Many people don’t see e-cigarettes as posing the same harm from second-hand smoke or fire, and will vape in places where they would not consider lighting a real cigarette.

The bottom line: there is no medical reason for a patient, visitor, or staff member to have this device in your facility.

While the medical community and Federal regulators are still wrestling with e-cigarettes, you can take some proactive steps to safeguard your patients, visitors, staff, and facility.

NYTimes.com: E-Cigarettes Under Scrutiny for Listing as Flight Hazard

This site uses Akismet to reduce spam. Learn how your comment data is processed.